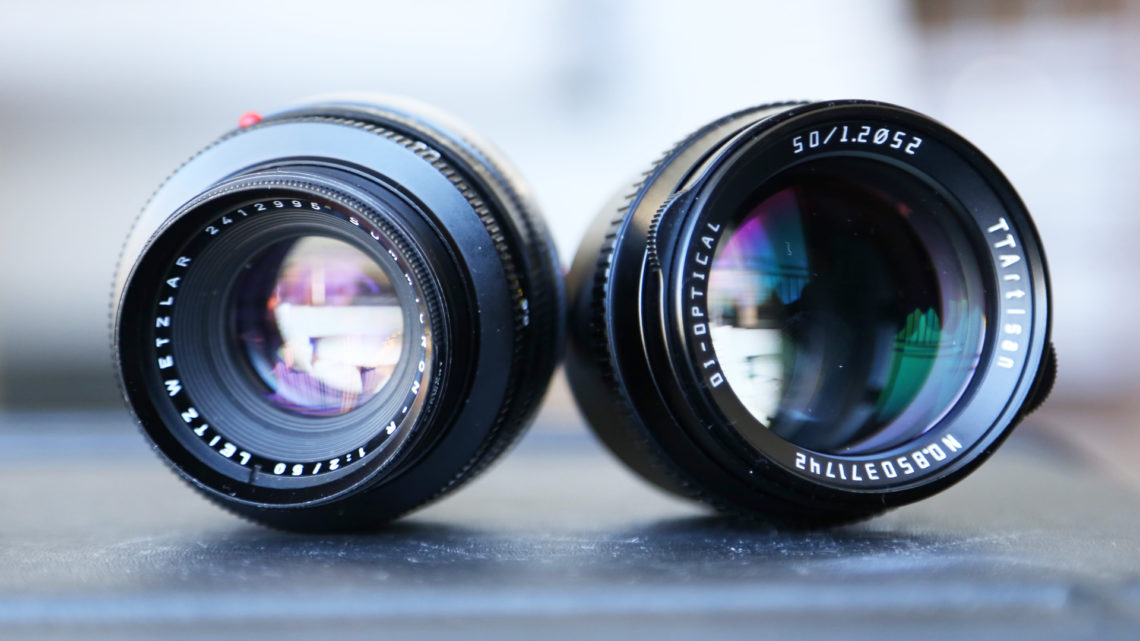 The TT Artisan 50mm F1.2 is an incredibly popular lens with filmmakers, mainly due to its fantastic image quality and low price-point. But how does it stack up to another fan favorite: The more expensive Leica R 50mm?

I decided to run a comparison between these two lenses as they are both viable options for filmmakers on a budget. Neither are dedicated cinema lenses of course, but they have found their way onto many film sets in recent years.

The Leica R 50mm can be picked up on the used market right now for about $500 – $700, which is relatively affordable for good quality vintage glass. I lucked out years ago and scored one for much less, but these days they are in demand again.

The TT Artisan 50mm lens is less expensive at about $100, and for that price you get a brand new lens from the factory.

But new vs. used aside, these two lenses aren’t all that different.

They share the same focal length, both have full manual controls, and each has a similar analog aesthetic – even the more modern TT Artisan.

I plan to use one of these two lenses on an upcoming narrative shoot, so thought I would share the findings from my test shoot below. Hope this helps those of you in the market!

All of the test images below were shot on my Fuji X-T4.

Both the TT Artisan 50mm and Leica R 50mm are well built, but subjectively the Leica R lens does feel sturdier. It’s a touch heavier in your hand, and the controls/rings lock into place better than the TT Artisan.

Really though, these lenses have a lot in common in terms of build. They are almost identical in size, both are constructed from real metal, and they are very similar to operate.

One notable difference is that the Leica has a smaller 44mm thread for lens filters, whereas the TT Artisan takes 52mm filters. Also – the Leica R has 6 aperture blades as opposed to 9 on the TT Artisan, which we’ll explore more shortly.

One advantage of the TT Artisan lens is that it’s faster than the Leica R.

The TT Artisan opens up all the way to F1.2, giving you two additional stops of light over the Leica’s F2 aperture. This can be a critical factor, depending on the type of material you are shooting.

That said, even at F2 the Leica R is still great. That’s far faster than many other lenses in this category, and certainly fast enough for most low-light scenarios.

One interesting thing I noticed, is that when set to the same aperture under identical lighting, the TT Artisan is about half a stop brighter than the Leica. So not only is it faster on paper, but it does appear to gather more light in real world scenarios too…

It’s minimal, but take a look –

This is one area where we find a pretty significant difference between the two lenses.

I wouldn’t call either lens “soft”, but there is no question that the TT Artisan is significantly softer than the Leica R – especially wide open.

But even when you close down the TT Artisan lens to F4 (which is close to its sweet spot), it’s not nearly as sharp as the Leica R. Check out both images below, each shot at F4. You can click to see the difference in full screen.

And as you can see in the next example below, the Leica R also holds edge sharpness better than the TT Artisan.

Some people prefer a softer look, especially when trying to mitigate the effects of ultra high-res digital acquisition formats, so you might even seek out a softer lens as a creative choice.

But to me, the Leica R is the clear winner here. It is sharp while still remaining natural, which is part of what gives it an authentic vintage flavor.

Both lenses claim to have a minimum focus of 20″, which is pretty good for the 50mm focal length. That won’t allow you to get extremely tight macro shots, but it will cover just about anything else – including closeups and portrait-style shots.

When testing the two lenses side by side though, the Leica R was able to get slightly closer when compared to the TT Artisan. I would estimate an additional 4 inches, which is helpful when you need it.

Interestingly, the Leica R also produces a slightly tighter frame. Take a look at the images below captured from the exact same spot –

Between the tighter field of view and the closer minimum focus, the Leica R gets you a fair amount closer to your subject. In the real world though, the difference is negligible and I certainly wouldn’t choose either lens just based on this discrepancy.

Both of these lenses are really meant for taking stills, so neither one has the long focus throw you might be used to with a dedicated cinema lens.

The Leica R does have a longer throw than the TT Artisan, however. I would estimate it to be about 25% – 30% longer. This is important if you plan to attach a follow focus gear to the lens and use it on a dedicated rig.

For my purposes though, I actually like the shorter throw of the TT Artisan 50mm. Unlike many filmmakers, I don’t plan to use the lens on a rig. In fact, my goal is the opposite – to keep my kit as small and discreet as possible.

And if I’m not using a dedicated follow focus, I would rather have a shorter focus throw to make it easier when pulling straight off the barrel.

The Leica R 50mm has 6 aperture blades, whereas the TT Artisan 50mm has 9. This makes for a big difference in terms of the quality and appearance of bokeh.

Below are two side by side images to compare, one from each lens –

In the example above, both lenses were set to F4 for consistency. But at virtually any F-stop you will notice this difference to one degree or another.

I also found that the TT Artisan lens was far more prone to flaring than the Leica R. At the same time though, the Leica R appeared to have a much more beautiful flare when it would catch the light. Here’s a side by side comparison –

Both lenses offer great color quality, but the TT Artisan is definitely more neutral than than the Leica R.

Depending on what you’re shooting, this could give the TT Artisan an edge over the Leica R, since it captures a more accurate and clean look in camera. The Leica R skews a touch green, which is something you might want to correct in post.

That said, color accuracy isn’t always what we’re looking for.

Take the Arri Alexa as an example – its colors are less accurate than many other brands (let’s say Sony), but also far more pleasing to the eye. Color quality is incredibly subjective, so there is no right or wrong.

When I look at the two (unedited) images above side by side, I much prefer the Leica R image. The colors may be less technically perfect, but they feel organic and alive. The colors are more vibrant, and the saturation levels feel more natural too.

Both the TT Artisan 50mm F1.2 and the Leica R 50mm F2 performed quite well in all scenarios. Each have their strong and weak points of course, but the overall difference between the two is minimal. Especially when you consider we are comparing a higher end vintage lens to a lower end modern lens.

The most noticeable technical difference between the two is in the sharpness department (with Leica having a big edge), followed by their distinctly different bokeh effects.

Having both lenses myself, I would choose to shoot on the Leica R 50mm over the TT Artisan in most scenarios.

The exceptional performance and natural aesthetic the Leica delivers is hard to pass up. Sure it would be nice to shoot at F1.2, but the two additional stops of light is not a make or break factor for me.

But for those on a budget, I wouldn’t hesitate for a second to shoot on the TT Artisan 50mm. Personally, I would be more than confident using it on just about any type of project, despite the Leica having a subjective edge.

What are your thoughts on these two lenses? Leave a comment below!

PODCAST: Making a $6000 Feature With No Crew In 11 Days With Director Pete Ohs