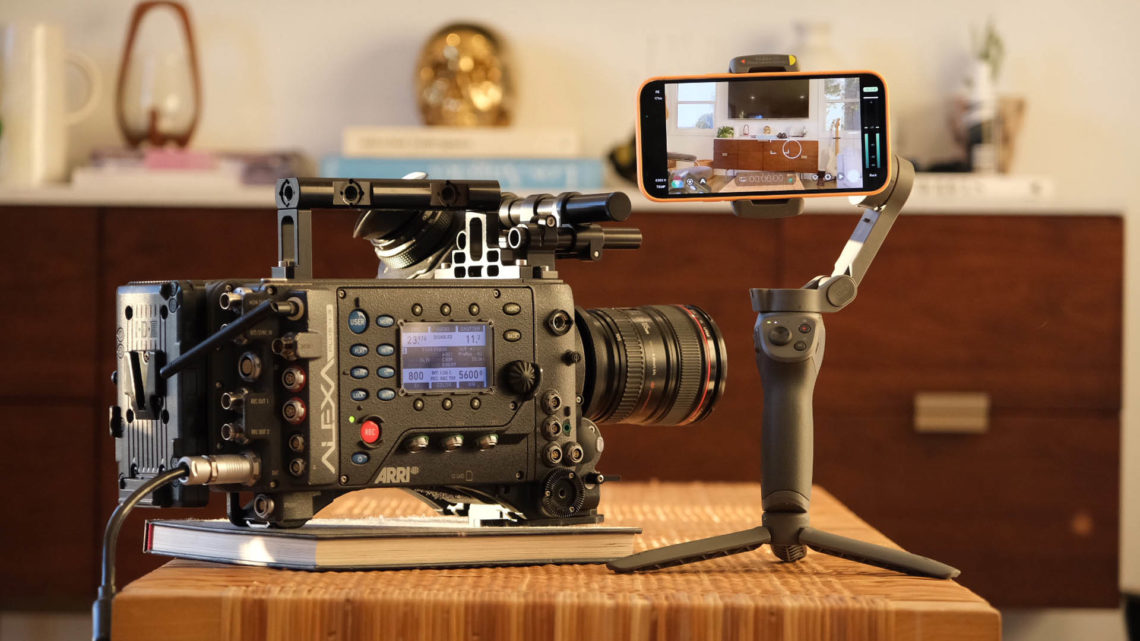 iPhone 13 Vs. Arri Alexa Comparison & Why Apple’s Color Science Is So Impressive

Curious how the new iPhone 13 video quality and color science stacks up to the Arri Alexa? I was too, so I ran a quick experiment.

There are many incredible cinema cameras on the market, but it is generally agreed that Arri takes the cake with regard to color science. Shots captured on Alexas and Amiras have a natural, filmic quality to them that is easy to grade and pleasing to the eye.

If you’re going to evaluate the color science of any camera right now, one way to do it (subjectively at least) is to do a side by side comparison with the gold standard: Arri Alexa.

Having just picked up an iPhone 13 Pro Max, I was curious to test it against my Arri Alexa Plus 4:3. I wasn’t expecting a perfect match, but I did want to see how close I could get the images… And the results really surprised me.

I always like to perform test shoots in an informal way that would mimic my process on a real set. Shooting test charts in a lab is great for other purposes, but is not particularly helpful for understanding the real world implications of shooting on various formats.

With that in mind, I simply set up my Arri Alexa and iPhone 13 Pro Max side by side and captured a handful of test shots around my house, aiming to match them as closely as possible in camera.

Other than the Alexa and iPhone, the only other gear I used for the test was my 24-105mm Canon lens (for the Arri Alexa), and a DJI Osmo stabilizer for the iPhone.

I shot with the Canon at 24mm to match the “23mm equivalent” standard iPhone lens. This was definitely not an exact match in terms of FOV, but was close enough for the purpose of this test.

The DJI Osmo was really just used as a tripod, allowing me to turn off any internal stabilization that might impact the image quality.

One thing I did not use were ND filters.

I didn’t have an exact ND match for both the Alexa and iPhone, and using mismatched NDs would have added an additional variable to the color correction process that would have complicated things.

Instead of using NDs, I adjusted shutter speed on both cameras to achieve the correct exposure. This ensured there were no strange color shifts due to the ND filtration, and helped the cameras natively match as best as possible.

To give the iPhone the best fighting chance, I recorded all the video files through Filmic Pro. This astounding app allows you to record using manual controls, log color space, and with high bitrates in 4K.

I of course shot in log at the highest resolution (4K) and with the highest quality record settings (Filmic Extreme).

This was my first time using Filmic Pro in quite a while, and I was really impressed with how the app has matured over the years. It’s an incredible tool that puts a cinema camera in your pocket at all times. I’ll definitely be using it more often after this experiment.

Now for the fun part – How did the iPhone 13 stack up to the Alexa?

Going into this test, I was expecting the cameras to be worlds apart… But with the right approach in DaVinci Resolve, they actually got quite close.

I started by bringing the Alexa footage out of log and into Rec 709 color space using my CINECOLOR Alexa Classic LUT. From there, I made some other minor tweaks to color balance and contrast to create a baseline to work from.

Then, I manually adjusted the shots from the iPhone to match the Alexa footage. This is where things got interesting.

One of the subjective metrics I use to judge color quality/color science is the sensitivity of the footage while grading. With low quality footage, even a slight color adjustment will completely throw off the palette and create undesirable results.

To my surprise though, the iPhone graded exceptionally well. It was easy to make small, nuanced adjustments, and ultimately to get the shots in the same ballpark as the Alexa.

I gave myself a time limit of 3 minutes per shot when color grading.

If you have all day, you can pull color keys and create masks and make just about any shot from any camera look however you want. But again, I wanted to emulate a real world process. I wanted to know whether I could get the iPhone to look like the Alexa within a reasonable amount of time and effort.

The answer was yes.

Below are a few shots comparing the two cameras. In each example, the first image is Arri Alexa followed by the iPhone.

Clearly there are differences between the Arri Alexa footage and the iPhone 13 footage, even after matching them. But the differences aren’t nearly as vast as I would have expected.

And in fact, most of the differences I notice (at least the obvious ones), are more to do with the sharpness of the iPhone and the internal HDR processing.

For instance where the Alexa will let highlights naturally roll off, the iPhone synthetically brings back detail. You can see this when comparing the windows in the background of my first example shot above.

These differences aside though, the foundation Apple color science appears to be built on is truly impressive. With very minor primaries adjustments, it’s possible to match colors from the iPhone within a reasonable range of the Arri Alexa.

This is also in large part thanks to the brilliance of Filmic Pro, which squeezes every last bit of detail out of that tiny sensor.

Does this make your new iPhone a replacement for a true cinema camera? Of course not. The iPhone still inherently has the look of a small sensor phone camera, and there is no getting around that…

But the fact that iPhone colors can be matched to Alexa with relative ease is very encouraging. This is something I can’t say about many DSLR/mirrorless brands that (despite their superior image quality overall), struggle in the color department.

I can only imagine that over the next few years the gap in color science between iPhones and cinema cameras like the Alexa will continue to shrink. And if Apple ever decides to release a dedicated camera with a slightly larger sensor, things will get really interesting.

What are your thoughts on the iPhone as a filmmaking tool? Leave a comment below!